Hijack in May 25, 2000 and A Homemade Parachute Escape of Doom 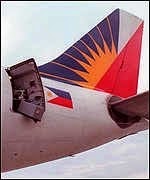 There were two different stories reported about Agusto's reasoning for hijacking the plane. The first account was told by his own family. The family said that the killing of Agusto’s father must have drove him to hijack the plane because he wanted to move his family away from the region after his father was killed back in 1993 (no one was caught for the killing of his dad). But lack of money made it impossible to leave the region, his family thought that the money and his desire to be a skydiver caused him to hijack the plane. Another story was Agusto's marital problems. He was relating a desperate story during the hijack that his wife ran away with a police officer.

The death of his dad and the running away of his wife with someone else must have been too much for him to handle, he snapped.

On May 25, 2000, Agusto decided to hijacked an Airbus A330-301 when it was near landing. He demanded to put all the pasengers' valuables in a bag and said that the plane will go back to Davao. The pilot explained that there was not enough fuel to return. Augusto decided to open his knapsack with a homemade parachute in it. He never used a parachute before, so he asked the stewardess how to use it. The plane descend to 6,000 ft at his request so he could jump. Suddenly, Augusto chickened out and clung at the door of the plane. His other shoe and gun were on the plane, he was obviously confused what to do. While he clung at the door with all his loot, grenade with ski mask and swimming goggles on, the stewardess pushed him out.

All passengers 273 aboard and 13 crew landed safely, except Agusto the hijacker. After 3 days they found his dead body plunged in the mud.
SPONSORED LINKS