Solving the World's Hunger with the Great Bug Hunt

The U. N. Food and Agriculture Organization estimates there are at least 870 million people malnourished of the 7.1 billion people in the world. This was the number suffering from chronic undernourishment from 2010-2012. These are people that lack food to eat in the developing countries. While 852 million live in developing countries another 16 million undernourished are living in developed countries.

The U.N. Food and Agriculture Organization also said that there are more than 1,900 edible insects that are fit for consumption, hundreds of these insects are already part of the diet in many countries.

I guess the U.N. is telling us indirectly that if we are part of the starving multitude we should collect and feed ourselves by eating these insects. Maybe, we could also make a livelihood from collecting and selling all the extra bugs we can collect which is not bad idea at all.

They’re low in carbs
100 grams of red ants can give 14 grams of protein, nearly 48 grams of calcium and iron


Grasshoppers are a good  source of protein  and  niacin (B3)


High source of rifloflavin (B2) and niacin (B3) vitamins
It adds apple flavour to sauces and a valuable source of iodine. They’re known to have aesthetic and analgesic properties 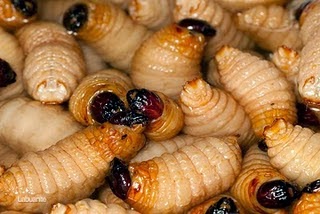 High in protein and are believed to help boost virility. They taste like crab

Scorpions tend to have a flavour like soft-shelled crab 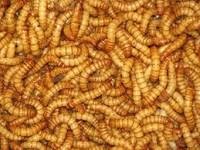 Eating Insects might be the answer to some of the world’s hunger problems.

According to the world hunger organization there are countries that have lowered malnourishment to almost 30% (Asia, Pacific). Also Latin America and the Caribbean decreased which is good news.

It is said that 29 countries in Asia and 23 in America are entomophagous. I am not sure if being ethomophagous has helped lower the number of malnourished in those regions.
In Sub -Saharan Africa the number is still high at 1 in 4 malnourished. I hope they will make use of all the insects they can find in their villages.

Many times it has been said that it’s safe as well as healthy to consume insects for people needing nourishment.