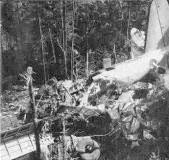 There are two people in the history of plane crashes that sabotaged the plane in hopes of ending the relationship with their partners and to be with their new lovers. The first happened in May 7, 1949 and the second happened on September 9, 1949. Unfortunately their stories did not have good endings. They were discovered and were punished according to their crimes.

The first crash was a Douglas C-47, en route from Daet to Manila. The bomb was placed by two ex-convicts who were hired by a woman whose intention was to kill her husband so she can be with her new man. Her evil plan succeeded but other passengers and crew were killed too, all 13 of them died that day. There are no further details about this crash.

After that incident, another person, Albert Guay sabotaged the plane that crash on September 9,1949. The air plane was a Canadian Pacific Airlines Douglas DC-3 en route form Montreal to Baie-Comeau and it had a stop over in Quebec City. Rita Morel, Albert Guay’s wife boarded the plane from Quebec without knowing her belongings had dynamite in it. Albert Guay wanted her dead, collect insurance money, and to be with his young mistress, Robitaille.

Albert Guay a jeweller had troubled in his business – insured his wife Rita for $5,000. The insurance is one problem for killing Rita...but there was another thing and perhaps the huge one – Albert fell in love with a younger woman (between 17-19), a waitress name Marie-Ange Robitaille. Rita discovered the relationship and Guay did not want to break up with the Robitaille. Divorce was hard to file for in those days, so Guay resorted to killing his wife Rita. First he wanted to poison her. Then he changed his mind because poisoning Rita would make him the primary suspect. Albert thought hard and finally made up his mind to blow up the plane with his wife on it. He probably thought that all passengers on board will be the suspect if his plan will succeed; blow up the plane over the St. Lawrence River. He also bought more life insurance for Rita worth $15,000 before the crash.

He was found guilty and was told... "Your crime is infamous. For what you have done, there is no name!"