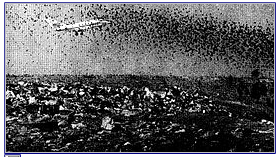 
Accidents occur when the bird hits the windscreen or is sucked into the engines. The annual damages have been estimated at $400 million within the United States alone and up to $1.2 billion to commercial aircraft around the world.

Birds that are Responsible for most Aircraft crashes:
Civil Aircraft Accidents caused by Bird strikes:

September 7, 1905:
This was the first bird strike reported. The aircraft struck a flock of red-winged blackbirds in Dayton, Ohio.

April 3, 1912:
Calbraith Rodgers was the first person to fly across the continental USA. He was the first person known to die as a result of a bird strike. The Rodgers' Wright Pusher struck a gull that caused the aircraft to crash at Long Beach, California. He was fastened under the wreckage and drowned.

Approximately six seconds after takeoff the aircraft met a large flock of starlings (20,000). The aircraft shifted to the left then resumed the runway heading and at 200 feet the air plane shifted left again and sank nose-up to about 100 feet in altitude. It then rolled to the left, the nose dropped, then the aircraft crashed.

The entire accident was so abrupt that it took less than a minute (six seconds) from takeoff to the plane's sinking in the bay. There were 72 passengers on the plane. Sixty two died from that crash.

Hundred of birds were ingested into the engines making no.1 and no. 2 engines lose power and shut down, while engine no. 3 flamed out. Engine no. 4 did not develop full power at a critical stage of flight. The aircraft was unable to complete its take off because there was not enough power to make the plane to fly.

Other birds crashed into the windscreen making it impossible for the pilot to see.

The other sad part aside from the number of deaths was that the pilot was only a few weeks to retirement.

From this accident the government and the industry were starting to see the danger of the bird strikes. There were policies put in place about the disposal of garbage and closing the dump-site near airports because they will attract birds that caused the plane accident. The wildlife management were also thought to be very important to lessen more bird strike accidents from happening to save planes and birds.