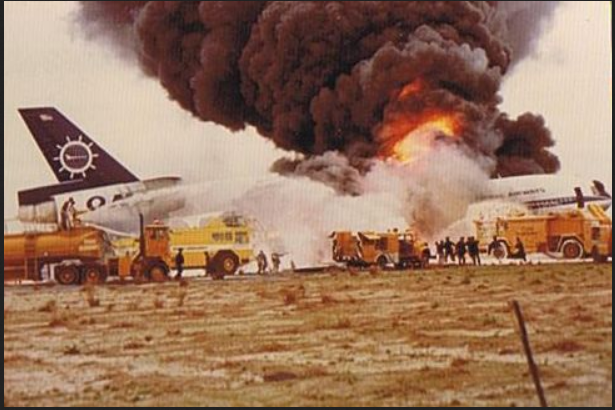 Bird strikes happen most often during takeoff, landing or during low altitude flight. Some bird strikes can also happen from 20,000ft to 37,000ft according to some reports.

The largest number of strikes happen during the spring and fall migrations. Bird strikes above 500 feet (150m) altitude are about 7 times more common at night than during the day during the bird migration.

United Airlines Flight 297 a Vickers Viscount 745D was a scheduled flight from Newark International Airport (EWR/KEWR) to Washington D.C. with 17 people on board.

At 12:24 P.M. it crashed northwest of Columbia, Maryland after striking a flock of whistling Swans while at 6,000 feet (1,800 m). The bird strike made the horizontal stabilizer separate, lose control then crash.

The crashed killed all people on board.

Before the crash happened the Air traffic control saw smoke coming out from the left engine and called the plane to notify them. The aircraft crew answered:

The aircraft smashed into the roof of an apartment building then to the wooded ravine. There were 5 passengers and 2 crew on-board.

One person on the parking lot was critically burned from the plane's fuel. Several cars were also destroyed.

According to the investigation the aircraft had collided with cowbirds during takeoff. There were 15 dead birds at the end of the runway. The left engine of the cockpit area had bird residue and feathers on the windshield. The foreign objects from the birds damaged the cooling ports and the rotor. The engine stopped running. They discovered that the left engine had encountered 14 separate bird strikes while the right engine had five. Loud bangs were heard as the aircraft tried to takeoff.

The dump site near this airport was still used despite the recommendation that was given to the Federal Aviation Administration (FAA) in 1971 and that they should close it by August 1972 but the authority did not follow through.

The bird strike caused too much damage to the left and the right engines and made the plane impossible to stay in air then the pilot lost control of the plane.

Everyone on board did not make it.

November 12, 1975:
From John F. Kennedy International Airport (NY) the pilot of Overseas National Airways DC-10 aborted the takeoff after gulls were sucked into one of its engines and the engine exploded. The pilot forced the plane to go back down as it was a few feet above ground. According to the report the tires of the plane blew out. The right landing gear collapsed, the right wing broke off and the engine fell off.

The plane burst into flames as soon it landed. It says the flames reached upwards of 60 feet. The pilot was able to act quickly by getting the chutes out before the plane totally was engulfed in flames.

All 138 (some reports say139) people on board got out safe from that accident.

Following this accident the National Transportation Safety Board (NTSB) recommended the Federal Aviation Authority (FAA) to evaluate the effect of bird ingestion on large high-bypass turbofan engines and the adequacy of engine certification standards.
SPONSORED LINKS