The Sinking of the Sewol, South Korea

Wednesday, April 23, 2014 0 korea, news, story, travel
A+ A-
Print Email
ADVERTISEMENTS
According to the Article 10 of Seafarers’ Act, a captain has to remain on board until all the passengers have disembarked.

The captain Lee Joon-seok of the Sewol was the first one to abandon the ship before the passengers. He abandoned the ship 30-40 minutes after it started listing. The captain, 69, is probably not the best suited for the job because he is no longer agile and can't think fast or logically except to save his own skin. For the past 20 years he has been navigating the sea labelled as “expert” in navigation. Now? People might label him expert in escaping a sinking ship. 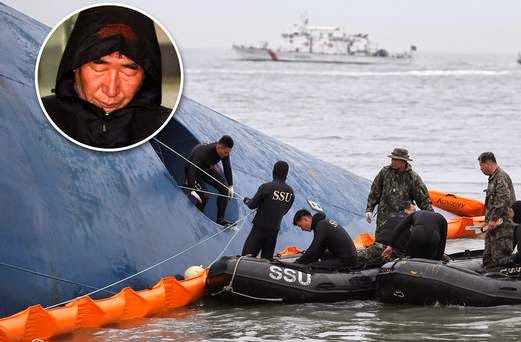 During the initial interview with the captain, according to the report, was drying his wet banknotes -that’s good for him but for the passengers trapped inside the boat---it’s really tragic!

Out of 30 crew, 20 survived. Other crew that died reportedly tried to give up life jackets for other passengers and two of the crew Kim Ki-wong and fiancee Jeong Hyun-seon refused to leave the ship while trying to assist other passengers.

The Sewol ferry was carrying 476 passengers and crew on a trip from the western port of Incheon to the resort island of Jeju. There were 339 students and teachers from Danwon school in Ansan on board. Only between 174-179 have been rescued. Among the early rescued was the assistant principal Kang Min-gyu who later took his own life in the pine tree using his own belt on Thursday April 17, 2014. On Monday April 21, 2014 the chief engineer was trying to end his life. Now the authorities are trying to keep an eye on him for further questioning.

As far as we know the 6,835-tonne ferry sank about two hours after issuing a distress signal shortly before 9:00am on Wednesday April 16, 2014. If you think about it two hours will give everybody time to abandon ship or stay on the high level of the boat where the rescue teams can see them. The captain said that the current and the temperature of the water (12 C) would make survival difficult. However abandoning the boat would probably give the passengers a greater chance of survival rather than being trapped inside their cabins.

The boat was thought to hit a rock as it made a sudden turn but officials are still investigating facts.

There are 555 divers sent for the recovery of the bodies trapped inside the boat. There are 3 cranes, vessels and also helicopters to help speed up the retrieval operation.

The death toll has now reached 156.

Hope the captain can bear all the shame and the guilt as he was not on the bridge as this happened and he was first among those who escaped.