The Rite of Passage, Madudjara Aborigines in Australia 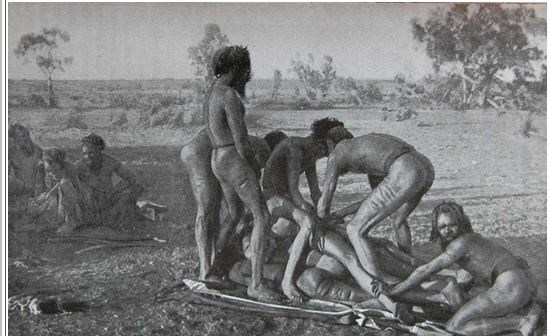 The traditional rite of passage from boyhood to manhood of the Mardudjara aborigines (Australia) consists of two parts: circumcision and sub-incision.


The aborigine boy will have to learn the ceremonial language damin or demiin (not dammit) before the ritual.


Women will not be allowed near the holy spot. Any woman found eavesdropping will be killed at once.


The Circumcision:
When an aborigine boy is between 15 or 16, the tribal elders will bring the boy to the holy spot to be circumcised. The boy has to lie down near a fire while members sing and danced for him. There will be another group of men called the mourners that wail and cry while the this ritual is performed. While the boy lays down for the circumcision, they have to put a boomerang between his teeth and he has to keep it there while undergoing the operation. The tribal elder sits on top of the boy's chest. The elder facing the boy’s penis will pull up the foreskin and then twists it to make sure it can be cut off. Two men take turns cutting away the foreskin with knives and will keep the foreskin for later use.


When the circumcision is complete the boy kneels on a shield that’s put over the fire to purify his wound.

Then here comes the yucky part... While the boy sits with of course intense pain the tribal elders tell him to open his mouth and swallow some “good meat” without chewing it. The good meat they will be referring to is the boy's own foreskin. He will be told he has eaten 'his own boy’, it will now grow inside him and make him a strong man.

The sub-incision:
A few months after the circumcision the sub-incision will follow. The tribal elders again will take the young man in the holy spot. The young man has to lie down near a fire. There will be singers and men mourning at the ceremony. Then the elder sits on the boy’s chest and this time he will take hold of the boy’s penis not the foreskin. The small wooden rod will be inserted into the urethra to act as a backing for the knife. An elder with the use of a knife will make a split on the underside of the penis from the frenulum to near the scrotum.


After the sub-incision the young man will stand above the fire and will let his blood to drip into the fire. It is said that the blood letting will be repeated through out adult life.


With the sub-incision the young man will have to squat when he urinates just like a woman.

Note:
Some anthropologists believe that the sub-incision ceremony is done to simulate menstruation of a woman and by doing so the male can sympathize with the women in the group.

However, others believe that the sub-incision was done as a form of birth control as it is difficult to sustain large number of people in the group with minimal subsistence.

With sub-incision, the ability to impregnate will be decreased.

This ritual is no longer practiced. Do not attempt!