Poaching in the Philippine Sea 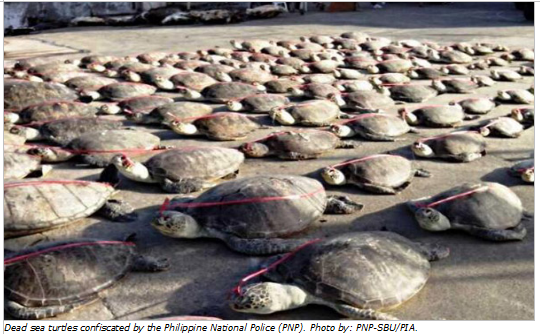 Earlier in the month of May, there were 11 Chinese fishermen caught with 555 turtles on their boats. 378 turtles where found dead and 177 turtles found alive were put back into the sea.

Two of the 11 fishermen are minors so they were set free.

Poaching turtles in the Philippine Sea by Chinese is not a new thing, there were reports in the past that Chinese fishermen were also caught taking turtles and giant clams from the disputed waters.

Every time this happened, China always demands the immediate release of the fishermen because...

China argues that:
The action of the Philippines was “provocative”. They believed the fishermen are in Chinese territory.

Philippines Argues:
Those fishermen are within 60 miles off the coast of Palawan within Philippine territory. Also, they are only protecting those turtles that are vulnerable and critically endangered species.

Philippines signed the international law to protect the endangered species and China signed it too.

The turtles are very useful for medicinal value, food and the things that can be made from the shells for example, guitar picks and handbags. In ancient times the shells were used as divination or to predict the future. The eggs are believe to have an aphrodisiac qualities.

Clam Incident:
There was another report from ABSCBN on May 23, 2014 about a dozen of fishing boats seen harvesting clams kilometres away from the Philippine Island.

The giant clams some experts said will grow that big within 50 yrs.

The water for sure turns murky and giant calms shells were sure broken when they took them out of the water.

These giant clams, are also considered an endangered species. Some of them are already extinct in some places where they were once common.

The Clams:
Chinese people believe that giant clams have aphrodisiac powers. Some scientists say that the bivalves of the clams are rich in amino acid that trigger and increased levels of sex hormones. The high zinc content also aids the production of testosterone. Chinese also use the clam shells for house decorations.

The UNCLOS:
The United Nations Convention on the Law of the Sea (UNCLOS) prohibits the exploitation or destruction of natural resources while the disputes over who owns a certain territory still going on.

Also the law prohibits the exploitation and selling of endangered species.

The Philippines asked the UN's Permanent Court of Arbitration to consider its case in January 2014. But China answered back by saying that they will not accept the arbitration.

Clearly the actions of these Chinese fishermen are defiant of the law of the sea.

All of those species have special part in the ecosystem. So it would be nice if those fishermen will learn some kind of discipline not to over exploit the marine life in that area. Also, it would be awesome if the next generation would still be able to enjoy them just like we do.