Do you know what a safety pin is?
If you do not know here is a picture of a safety pin which is also called baby pin. 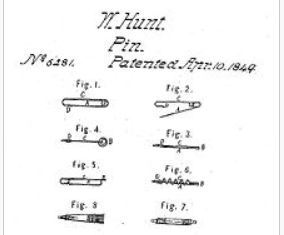 Who invented the pin:
American mechanic Walter Hunt (July 29, 1796 – June 8, 1859) is regarded as the inventor of the safety pins. The story was in 1849 he owed $15 to the Richardson brothers and he needed to pay them. They probably bothered him all the time to pay the said amount of $15, so to keep his sanity, he decided to invent something to pay them off.

With a single wire he tried to twist it and twist it for 3 hours until it formed into a pin.

He patented it but he did not think highly of his invention. He sold it later to W.R.Grace and company for $400. He used the money to pay his debt of $15, and the remaining amount of 385 was left for himself.

Selling the patents was a wrong move for Hunt, because in the following years, W.R. Grace and Company made millions of dollars in profits from his safety pin invention.


It was not the first time that he made a wrong decision about his invention. In 1833 before he made the pin, he invented a sewing machine. He did not patent it for fear that his invention would create unemployment for the seamstresses. Walter Hunt did not realized that if he will not patent it, others will. The sewing machine was re-invented by Elias Howe.


In 1858, Isaac Singer decided to pay Walter Hunt $50,000 to clear up the patent and the design about the sewing machine. However, Hunt died before Singer was able to pay him.