Vanuatu Land Diving as A rite of Passage and more 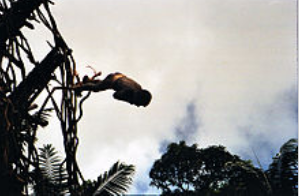 Vanuatu is a small island in the middle of the South Pacific.

Before land diving become a traditional ritual for men 15 centuries ago, there was a legend about a woman running away from her sexually aggressive husband. She was upset and she ran away to the forest to hide but her husband followed her. She climbed to a Banian/Banyan tree. Her husband climbed after her. She tied her ankles with the tree vines and then jumped. Her husband jumped too but he died after jumping because he did not tie his ankles with vines before jumping off the tree. Men jump from high towers with the belief that they will not be tricked again.

The men believe that the said husband of the story will avenge his death. So, part of the preparation of the land diving is that women are prohibited to be near the tower before the ritual. The divers also avoid sex and a night before the ritual divers have to sleep underneath the tower to ward off the bad spirit.


Land Dive for Yam Crop:
Land Diving is associated with a good yam harvest. Men land dive as a sacrifice to make the gods happy and give them bountiful harvest of yam crop. The higher they jump the better the harvest.


Land Dive as a rite of passage of young boys:
Once a young boy is circumcised he is now allowed to wear braided fibres over his genitals. Then he is now allowed to land dive. The boy will start jumping low then to a higher land dive.
The boy will jump with the elders and their mothers watching him. A mother will be holding his favourite object or anything the boy likes while the boy will do the land dive. Once a boy accomplishes the land dive, his object will be thrown away as a symbol of manhood.


Land Dive for other reasons:

They said that land diving removes some illnesses as it give strength to the men diving and it also an expression of masculinity in the ritual. The higher a man can dive the manlier he can be regarded in the community.

Months for land Diving:
Around the months of April, May and June people build towers up to 100 feet, probably more. The men tie vines on the platform on the tower and also around their ankles. Then men have to dive from the platform headfirst. It is said that these divers can reach the speed of 45 miles an hour as they fall to the ground.

The diver has to aim to land very close to the ground or shoulders may even touch the ground. If you miss calculate your landing then that would mean serious injury or even death. The safety, depends upon many things for example, the elasticity of the vines, your weight and how the elders calculated the strength of the wood used in making towers for land dive.

Early morning before the divers land dive, divers have to anoint themselves with coconut oil. They can also decorate themselves with boar tusks. The men also wear nambas or cloth that they wrap around their penises (penis sheaths). Women  have a part in the ritual as they dance with their grass dresses but bare-breasted. 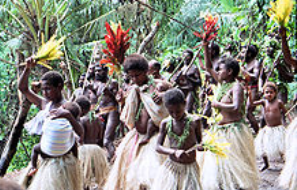 When the diver is on the platform. He can show off his talent just like at the X factor or Got talent shows. Up the tower he can sing a song, dance, give speeches, or do pantomimes. Then with vines tied to his ankles, arms crossed, head tucked between arms then he is now ready to land dive.


Do not try this ritual. It is very dangerous. It is said that before jumping the divers are advised to bring closure to any disputes or ill feelings in case this will be their last jump.