The Demise of the 44 SAF Filipino Commandos

Maquindanao, Philippines -The 44 members of the Special Action Force (SAF) died after the so called mishap in Mamasapano Maquindanao. The SAF members were sent to get the high profile terrorists in Mindanao. They took on the mission January 25, 2015.

Due to desperation some texted and talked to their family for prayers. Others urged their families to pass on the request of reinforcement. 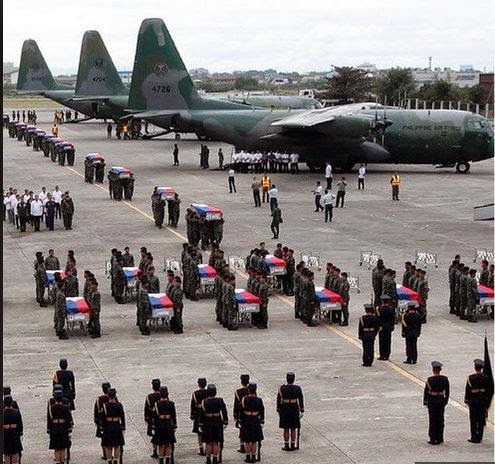 The 44 SAF asked for help but no reinforcement came. When they ran out of ammunition they tried to retreat but the BIFF cornered them at the cornfield. Some reports said that the militants kept shooting at the SAF even when they are already corpses.

The Oplan wolverine Mission:
The Oplan Wolverine was endorsed in 2011 by Allan Purisima a Director General of the Philippine National Police (this officer is suspended). The main mission of Wolverine is to capture high ranking terrorists hiding in the Philippines using well trained commandos called the Special Action Force (SAF).

The SAF's task was to catch Malaysian bomb-maker Zulkifli bin Hir a.k.a. Marwan or Mads for short. Marwan is accused of the 2002 Bali bombings in Indonesia killing 202 people. He has a price of $5,000,000 for his capture. He is responsible for at least 9 bombings in the past.

The other mission of the SAF is to catch Abdul Basit Usman the accused bomb expert. Usman is a local terrorist and is said to be responsible for 9 bombings in the South. He has a $3,000,000 price on his head.

Last year, there were 2 subsequent operations, but both failed. They called the operations Oplan Terminator 1 and 2. The recent operation was called Oplan Exodus. Marwan is dead but Usman escaped.

Defensive Mode:
Some of the authorities involved in the mission are now in the defensive mode. Mar Roxas (DILG secretary) does not know of the mission. And so the other officials were not consulted. Directed General, Allan Purisima (suspended) reasoned he was not the ground commander. He did not know. He only gave advice but not an order.

Getulio Napeñas (sacked SAF commander) took responsibility for the bloody encounter. But he pointed out that he tried to coordinate for reinforcement when needed, but help was not made possible. The late arrival of the reinforcement, cost the lives of his men he said.

The 45IB detachment was just 4 to 5 kilometres away from the battlefield. But the lack of a plan and information thwarted the aid. The 45IB was in Aquak and the other Philippines army 60Ist IB is in Awang.

The army officer said that the other commandos were just 1.5 kilometre away from the fighting site. So they could have done something to save their fellow SAF. Other officials said, they did not received any formal request for reinforcement.

Videos of the SAF:

There were videos that had been circulating since the death of the government troops. They were being shot close range, bullet proofs taken before they were shot on their bodies aside from shooting at their faces while still alive. Individuals taking video were laughing, talking gibberish while looking at those deformed corpses.

The victims personal belongings were also taken (some SAF had no pants on, save their boxers). Some of the rebels who took their victims cell phones reportedly called the families.

Before the videos uploaded online, some families already suspected that their loved one had been tortured by the guerillas. One wife who was interviewed, said that her husband's eye balls were taken out. There were also slices of both ends of the mouth. There was also another guy who said, that his brother appeared to have burns on the face and cut on the neck.

Sideways:
Mamasapano town has 21 local police officers that work for the population of 22,000. The police officers are equipped with 9 mm guns. They are asking for additional men and more powerful riffles.
SPONSORED LINKS