Mary Jane Veloso: The Drug Mule will be Executed Tomorrow 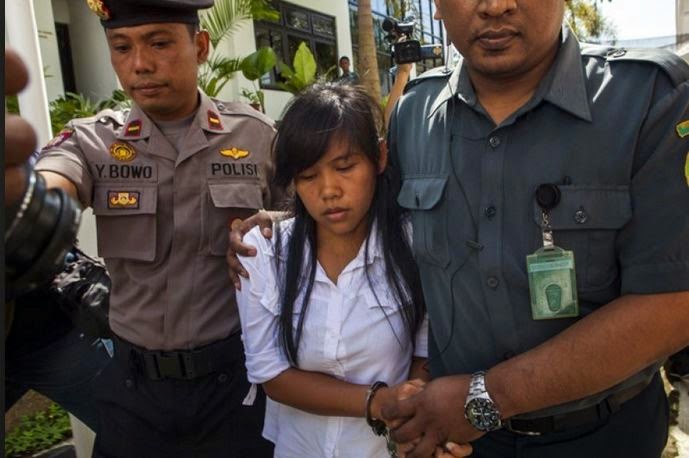 The Filipina single mother who went to Malaysia for supposedly working as a maid is
now on a death row. The execution will be carried out tomorrow on Wednesday morning. People from different groups including lawyers made 2 appeals to the President of Indonesian President Joko Widodo but both were rejected.

Since 2010 she was in jail for drug trafficking. The heroin (about 2. 6 kg) was stashed in her new bag given by the recruiter (so called friend and neighbour). She was supposed to work in Malaysia as promised by the recruiter but the job was already taken so Mary Jane went to Indonesia instead. At the airport the authorities slashed her bag when the alarm went off. Mary Jane stayed but the so called recruiter disappeared.

When the family learned of what happened they asked help from The Department of Foreign Affairs (DFA). The DFA did not help the family and the representative from the Department insulted the family. Someone told that Mary Jane deserved to be executed for what she had done.

At this time I do not think that they can change the mind of President Widodo. But I would say that the punishment of execution is too excessive for the crime. Even if she was aware that she was bringing drugs into Indonesia. The punishment is really cruel. They could have make a deal with the mule to capture the drug Lord. If they kill the mule then the drug Lord will just find another naive ignorant person to be their mule.

Mary Jane might be the first Filipino to be executed in Indonesia but she is not the first to be executed as a mule. There are many reasons why many Filipinos can be easy victims for this crime. Filipinos are so naive, some are ignorant, so trusting and will believe what anybody says. If you say the “sky is falling” they will believe it to be true.

I hope that President Widodo will dream a bad dream tonight and will try to spare Mary Jane's life tomorrow.

I hope a miracle will happen to this person tomorrow by sparing her life from execution. And if the execution will go through, I hope that this become a lesson for every Filipinos. Do not be so trusting. Do not bring other peoples' bag even from a so called friend. Learn how to say No. Also, the Filipino government when giving a passport to their own people, should provide a reminder to only carry their own bag and use their own bag when travelling.

Mary Jane will executed on Wednesday with 8 other convicts; four Nigerians, two Australians, one Brazilian and one Indonesian.


The doomed convicts in Indonesia:

1. The convicts have to wear white clothing which symbolizes afterlife
2. Convicts will be brought to the Death Valley to be executed
3. Convicts can be blindfolded and choose either to sit stand or kneel with ands still tied.
4. Convicts will be given 3 minutes to calm down. A Doctor will put a black cross right over the heart.
5. Twelve marksmen will line up and fire. However, only 3 have live bullets.
6. The doctor checks if a convict is still alive. If still alive, a commander will shoot the head.