China's Yulin Festival: Dogs and Cats are Slaughtered and served with Lychee

The celebration of Yulin festival in Guangxi province started in 2009- 2010 by the dog meat traders. The festival marks the summer solstice. During the festival local people come together to eat dogs and cats served with lychee.


The celebration is condemned internationally. 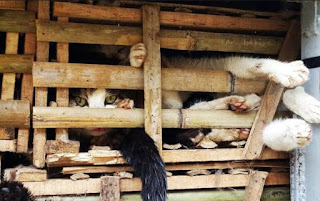 Animal right activists also purchased dogs and cats to save them from the dog dealers. Ms Yang paid 7,000 Yuan (£720) to save 100 dogs. 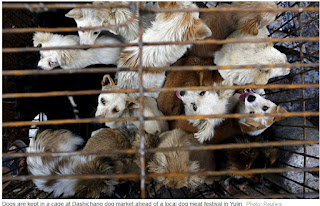 Other Campaigners blockaded streets, raided slaughterhouses to save them from being killed. Some locals however were not happy with the activists, so they chased them with brandishing sticks and tore their banners.

Food safety regulators have increasingly spoken out about the health risks however, the government is still not doing anything to end the practice of eating dog meat.

On Sunday, half a million people signed the petition to stop the practice of killing dogs and cats during the festival. On Monday the signatures reaches 3.8 million.

Dogs and cats are being kept in crowded cages, electrocuted, burned and skinned while very much alive and conscious.