Attacks in different places have been reported Last week June 26, 2015. It is kind of scary to go outside the house. In the past there were shopping malls with incidents of hostage and shooting sprees. If you want to go to the coffee shop there were also people being shot. If you tried to relax at the beach, even there the bad guy will shoot people like crazy. If you go to church its not a safe place either. 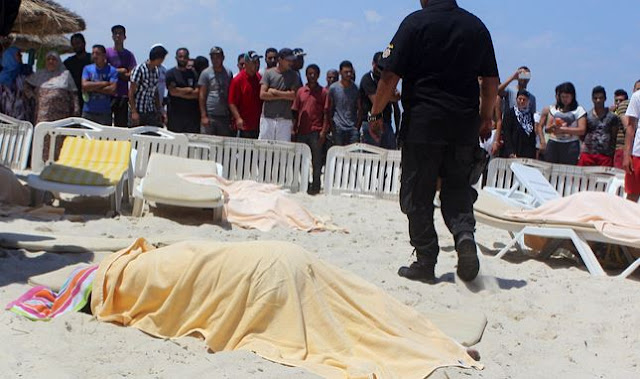 Among the dead; 30 Britons, 2 Germans and a Belgian and 3 Irish citizens, a Portugese and a Russian.

This is not the first time that Militants killed people. Back in March militants also killed 22 people.

In the latest attack, the attacker, Seifeddine Rezgui pretended to be a swimmer but carried a riffle inside the umbrella to avoid suspicion. Then he started shooting on the beach before he went inside the Hotel Riu Imperial Marhaba and he continued shooting while walking past the pool. According to the report it took him 45 minutes to kill 38 people.

The shooter was shot dead by the police when he tried to shoot back at them.

A second suspect of the attack had been arrested reports confirmed.

One of the survivors, Steve Johnson said that while they were lying on the beach they heard something and they thought it was fireworks but then people are screaming and running. He was hit on his arm and ran to the sea. His wife ran back to the hotel.

Another survivor. Saera Wilson (Welsh tourist) said her fiance took the bullets for her. He used his body as a shield to save her. Three times he was shot.

Tunisian President Beji Caid Essebsi has promised "painful but necessary measures" in the wake of the attack.

The Tunisian authorities said on Thursday July 2, 2015 that they had eight people in custody, seven men and a woman, on suspicion of being directly involved in the horrific beach attack.

It’s kind of scary nowadays, but fear should not stop people from living and enjoying their lives. If people stop doing what they love to do for fear then it is just like they stop living at all and also have given the chance for the terrorists to win.

He was 23 yrs old. Lives in Gaafour , Tunia. He liked ISIL propaganda videos. Authorities have confirmed that Resgui crossed the border to be trained in a jihadist camp in western Libya.