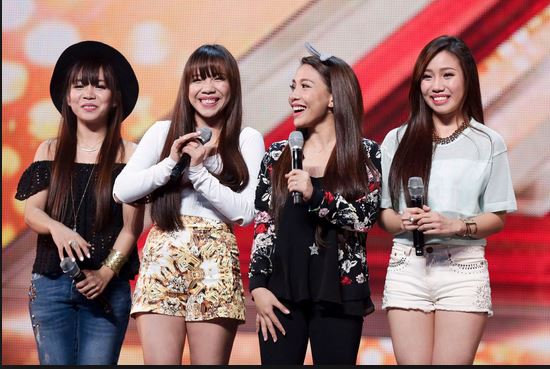 Is was obvious that Simon and the other judges were loving the 4th power's performances. In the six chair challenge Simon was waving to the girls as they appear on stage to start their performance and Simon was also the very first to stand up after their performance.

In the 6 chair challenge, their performance was considered absolute perfection, phenomenal and amazing.

The four sisters are from Isabela Philippines. They are equally talented. They can sing in perfect harmony, dance, rap, beat box and do whistle tone. Almira used to be the only one amongst the siblings to sing in competitions. Other siblings, Celina , Mylene and Irene were into dancing, then the aunt realized that the other 3 siblings can also sing. The ladies taught themselves how to sing. At first they sung in unison. Almira who was taking voice lesson for free shared what she learned to her 3 siblings. Then later someone taught them how to harmonize. The group practiced everyday for 2 hours. Also, if they couldn't sleep they would jam as they slept in one room.

The 3 cover the Korean dance Crazy:

Their x factor audition made the group an instant favourite of the show. They giggle a lot --- I think that's a Filipino thingy (giggle when nervous, when happy and even when sad they giggle too). During the boot camp their group was considered the best group that had performed.

Their audition performance was considered one of the best audition ever performed in the show.

The group won the best group in World Championship of Performing Arts (WCOPA) Junior division representing their country competition in 2006. They took home 16 gold medals. This happened after the group lost a local competition. Then in 2013 after winning a competition locally, the group went on to compete once again in WCOPA in a senior division between different song categories or musical genres, vested by 53 countries. They took home 24 medals (20 gold 4 outstanding plaques). Bringing home the tittle as the best group in the world.

Last year, they competed in K6 Korea but unfortunately they did not win. However, one judge in K6 noticed Almira's powerful voice and requested her to sing another song after the audition. Other judge in a local competition said, that if ever they lost in the competition it's because they deserve more, for they have great talents.

The group won some competitions but have lost many. Others told them to just give up because they are not going to make it. But they did not listen.

Anyways, many love this group, they are sisters and they always huddle together (like chickens) every time they await for the judges comments.

If ever they will change their name it should be $mp4ct. Dollar sign because they seem to be popular now and many would be buying their records when the X factor is over. $mp4ct because their story will serve as a reminder that there is always hope in life. Their story will be an inspiration to the people who are poverty stricken. Make use of what you have and make your life better.

Before, their dad was like a hobo just picking junk and any scraps he could find to sell to buy food. There were times they were almost evicted for failing to pay the rent. Then, they usually skip meals so they can afford the bus fare for a competition.

Many predicted the group to win in x factor 2015. If the group wins they will surely scream in harmony and if they lose? I already know what they are going to do. They will Keep on going--- … and they will “show us How its done”…Ya-ya-ya-ya.
SPONSORED LINKS