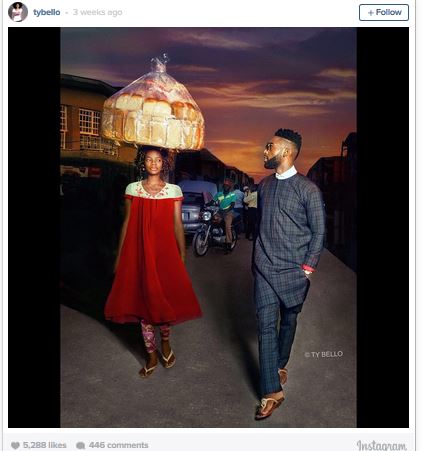 Some people try all kinds of things to change their lives but fail, their lives are still the same. But others just do their normal thing and then something life changing happens.
I think something called “luck” could be working with our lives sometimes.
In Nigeria a woman doing her everyday work as a bread seller accidentally photo-bombed Tinie Tempah's fashion shoot, his ancestral country. The bread seller stole the spotlight.

A Nigerian photographer and musician Ty Bello, photo shot a local bread seller that suddenly appeared next to the British singer and song writer. She was wearing a red dress and white flip flops.
The result of the image was amazing that the photographer decided to track her down. She was also asking help from the public to help her find the woman that appeared on the image. She offered to help her portfolio if she can find her.

Olajumoke Orisaguna is the name of the woman who appeared at the photo shoot. If you look at it, it she seemed to be part of the shot. It is really cool.

It did not take long before Olajumoke Orisaguna landed a modeling contract. The 27-year-old woman ended up being shot by Bello herself for the Nigerian magazine This Day Style, gracing the cover decked in red attire. 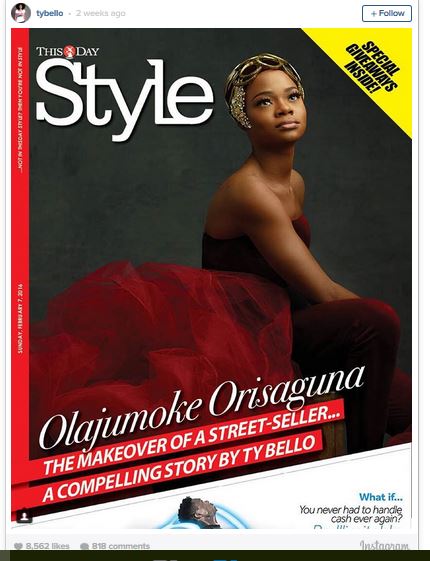 Bello shared their amazing story in the magazine and on Instagram.

“A hair stylist from Ire in Osun state but not making enough profit between she and her husband, a sliding door installer in from same village, to care for their two young children.

At the invitation of a distant relative who knew someone operating a bakery, she relocated to Lagos with her 14-month-old daughter to give bread hawking a try, leaving her husband and older 5-year-old behind.

As I listened to her, I wondered if the beauty I had seen on my screen as I edited my image was a fluke, well until she smiled, I realized that I was wrong, I had in fact, underestimated the beauty of this 27-year-old woman. As always, it was her eyes and of course, her perfectly chiseled features that jumped out at you when she chuckled. This lady belonged in front of my camera. After a conversation with her husband telling him the story of our meeting, I decided I was going to photograph her that very afternoon. Within an hour, Bimpe Onakoya, one of Nigeria’s leading makeup artist, and Zubby, one of my favourite hairstylists, were at my studio to work magic. They had both followed the story online and were more than happy to put in their very best for her.

Olajumoke, with curly extensions out, revealed a short natural afro that beautifully hugged her face. @Bimpeonakoya also had decided to keep the make up minimal. She stepped in front of my camera and I almost couldn’t recognize her. She moved different too. Jumoke looked straight into my lens, emoting like she had done this all her life. I knew we had found a star.”

Such a lucky woman.
SPONSORED LINKS