Dindim: A sweet Magellanic Penguin Travels Miles away just to be with his Human 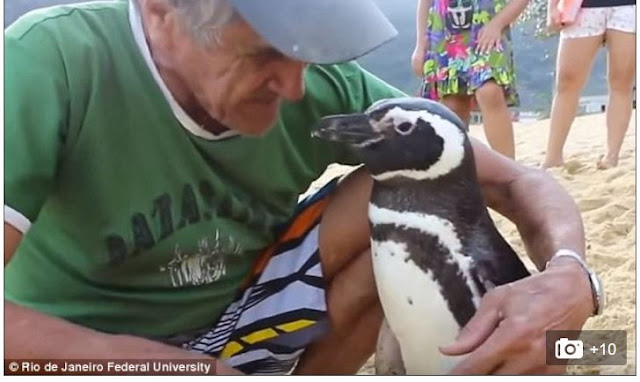 You may have heard a sweet story about a penguin named Dindim. And how this penguin swims thousands of miles every year to see the man who had given him a second chance at life.

The story was first told by a biologist Joao Paulo Krajewski (his last name sounds like one the penguins of Madagascar “Kowalski”).

This Penguin was found dying because of an oil spill.

According to  bird-rescue.org “when oil sticks to a bird's feathers, it causes them to mat and separate, impairing waterproofing and exposing the animal's sensitive skin to extremes in temperature. This can result in hypothermia, meaning the bird becomes cold, or hyperthermia, which results in overheating. Instinctively, the bird tries to get the oil off its feathers by preening, which results in the animal ingesting the oil and causing severe damage to its internal organs. In this emergency situation, the focus on preening overrides all other natural behaviors, including evading predators and feeding, making the bird vulnerable to secondary health problems such as severe weight loss, anemia and dehydration. Many oil-soaked birds lose their buoyancy and beach themselves in their attempt to escape the cold water.”

This Penquin is so lucky to be found at the right time back in May 2011. Dindim the Magellanic penguin can hardly move when a local citizen found him. Pereira de Souza found the helpless creature in his backyard which opens up onto Proveta Beach in Rio de Janeiro State, Brazil.

The 71-year-old retired mason cared for the penguin by washing the oil off of Dindim's body and fed the bird sardines over the next few days while the penguin was still recuperating.

When Dindim became strong enough, Pereira de Souza took him to a nearby island and released the bird into the sea. Then surprise! Later that day, Pereira de Souza heard squeaking in his backyard. He saw the penguin had returned and was squawking out for him.

Pereira de Souza's grandson who was about 2 years old, is the inspiration behind Dindim's name. The grandson "could not properly pronounce the word 'pinguim,' Portuguese for penguin," said the biologist Krajewski, the toddler would pronounce it "Dindim." So they called the bird Dindim others said Jinjing.

Dindim took up temporary residence in Pereira de Souza's backyard until February 2012. In that month of February, Dindim simply disappeared. It's not known where he went but months later he returned.

"Because penguins are usually very loyal to their pair and breeding site, where they spend the summer, they tend to come back to the same place every year," said Krajewski.

Every month of June Pereira de Souza will know that Dindim is back because the bird always calls out and waits for him from his back yard. This happened every year. The penguin returns in late June and stays until mid-February.

It is said that the Penquin seems to be excited every time he sees de Souza from his journey. Dindim always has lots of kisses for de Souza.

Dindim allowed de Souza to pick him up and put him on his lap and clean him. But Dindim doesn't allow anybody to pick him up. He will squawk if people do that.

Krajewski says they don't know where Dimdim goes the rest of the year, but the biologist says it's extremely unlikely that he travels to Patagonia which is known to be a breeding ground for Magellanic penguins. When these penguins finish breeding and moulting, they migrate and spend months feeding in the sea.

Krajewski said that Dindim is about 6 years old. Researchers with Brazil's Ubatuba Aquarium also took a blood sample and tagged him for future research.

"Professionals who work with animal rescues make the most to avoid relationships like this so they are able to reintroduce the animal into the wild," said Krajewski. But Dindim's situation is very different. Dindim is allowed to spend time with the man he trusted with his life.