Minke Whales: The World is Wailing over Japan's Whaling

Japan has killed 333 minke whales 103 males including more than 230 females as part of this year’s Antarctic whale hunt, according to the country’s Institute for Cetacean Research. Ninety per cent (90%) of these female whales were pregnant.


The International Whaling Commission, which regulates the industry, has banned commercial whaling since 1986, but an exemption for scientific studies remains. Japan has long been accused of using this exemption as an excuse for commercial whaling activities. International Court of Justice rejected Japan's scientific claims and ordered an end to its JARPA II research, which claims to study the maintenance and improvement of the minke whale population and the effects of environmental changes on the whale's food supply, according to its website.

Japan launched a new research program after the court ruling in 2014 that says 333 whales could be killed annually, according to Japan's Fisheries Agency and Ministry of Foreign Affairs.

After the international court ruling, Japan halted its whaling activities briefly, but then resolved to begin whaling again in the 2015-2016 season. It revised its program to be more scientific, and it lowered its quota of whales by about two-thirds.

In previous years, Japan has killed between 200-400 Antarctic minke whales each year.

Japan maintains that it must capture and kill juvenile and adult females in order to determine the age at which minke whales reach sexual maturity.

The four vessels left the port of Shimonoseki, southwest of Tokyo, in December 2015 and returned Thursday. The expedition was part of a 12-year program that will kill 4,000 minke whales which many people thought just a guise for commercial hunts.

On social media, Greenpeace, a longtime opponent of Japan's whaling program, stated in a tweet: "The Japanese whaling fleet defies the UN and kills 333 whales, including 200 pregnant mothers."

“It is in my view abhorrent and a throwback to an earlier age,” he said. “There is no scientific justification for lethal research.”

Hunt criticized Japan for going ahead with the killings “in spite of a resolution by the International Whaling commission calling on it not to go whaling”. 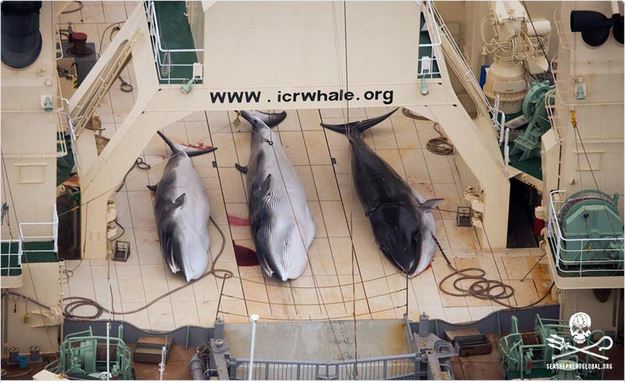 Captain Alex Cornelissen, the CEO of Sea Shepherd Global said,
“This rogue act is in blatant disregard of international law and diplomacy, and sets a dangerous precedent for all nations that respect the rule of law.”

In 1908 the Nihon Hogeigyo Suisan Kumiai also known as Japanese Whaling Association was established with Jura Oka as the first President. The association has 12 companies with a total of 28 whaling vessels. The number of whales killed that year were 1,312. The average kill for the next 25 years would be around 1,500 whales.

Oka said in 1910, "I am firmly convinced that we shall become one of the greatest whaling nations in the world. The day will come when we shall hear one morning that whales have been caught in the Arctic and in the evening that whales are being hunted in the Antarctic."

According to seashepherd.fr/news Japanese whalers operating between Japan and Korea were largely responsible for practically wiping out the Western grey whale populations. By 1915, only 150 of these whales could be accounted for.
SPONSORED LINKS