It is said that Bird strikes affect all kinds of aircraft in all parts of the world. Back in 2000, Bird Strike Information System reported that there were 8,458 bird strike accidents globally.

According to the report, The Financial losses due to bird strike is estimated at least US $1 billion per year. In Canada it is estimated that bird strikes cost $500 million to $1 billion a year. There are also lives lost due to this kind of accident.

Part of the solution that was created to solve the problem of bird strikes is to train Border Collies to work at the airport, chasing off birds and other wildlife.

In 1998, The Border Collie program was launched by Nicolas B. Carter, Ph. D. a zoologist. He is the director of Border Collie rescue. It is an organization that helps rescue and train Border Collies that have been given up for adoption.

Some people find Border Collies unsuitable to be household pets due to their demanding personalities. They need physical exercise and mental stimulation. It's been said that they will develop a neurotic behaviour if their needs are not met, i.e. digging holes, biting walls, chewing and other destructive behavior.

Border Collies are considered the most intelligent dog bred in the world. Example, a Border Collie named Rico (2002) who has a 200 vocabulary. Betsy (2012) has 340 words, her lateral thinking is comparable to the great apes. Chaser (2011) with the largest tested memory of any non-human animal. She can identify 1,022 toys by their name and can fetch them.

These dogs are also bred for sports/show. They excel at competitive obedience, showmanship, flyball, tracking and others. Border Collies are also known to be hardworking bred of dogs.

It was reported that a trained Border Collie working in the pasture is equivalent to 3 – 5 humans.

Training Border Collies to work at the airport takes at least one year. About one hundred hours is needed to train their handlers. The cost would be around US $15-25,000 per dog. These dogs are custom trained to the condition of the specific airport they are being assigned. Examples, if alligators live near the airport, if the dog will work in deep snow, or if the dogs need to ride an automobile.

According to Carter, after the completion of the training the dogs are
“perfect", "They don't make mistakes. They're like a dog on a remote control.”

It is also said that wildlife that comes to an airfield and physically removed by humans will return within twenty-four hours, whereas, if the Border Collies will scare them away, they will not return to the airfield for 3 weeks or longer.

Southwest Florida International Airport (RSW) is the first airport to use border Collies since February 11, 1999, to scare away birds and other wildlife at the airfield.

Other Border Collies that Work at the airport: 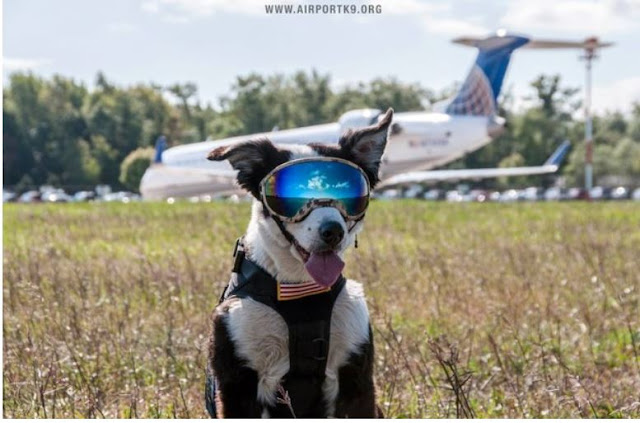