Bull fighting: Bull breeder sent his Bull to its` end with a kiss of death

Bullfighting aka tauromachia or tauromachy. Played by professional toreros (bullfighters). The most senior kills the bull which is called matador. 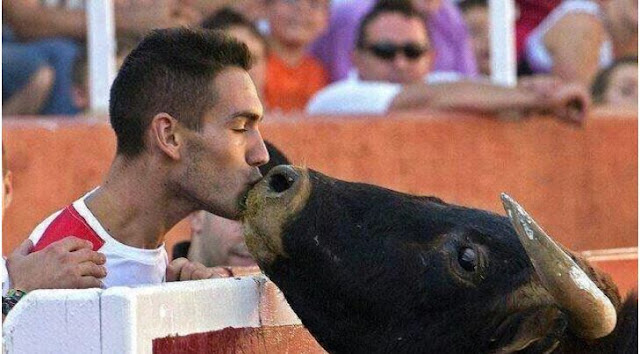 Bullfighting usually has three stages, in which the bull first endures repeated stabbings from horsemen wielding lances; then piercings by banderilleros carrying colorfully decorated, barbed sticks called banderillas. In the final stage, the tercio de muerte, the matador aims to kill the bull by piercing its heart with a sword thrust between the shoulder blades. 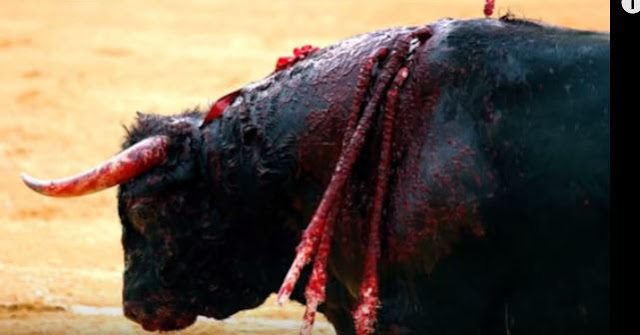 According to a report even ‘from the moment they enter the ring, the bulls don’t stand a chance. They may be weakened by beatings, have their horns shaved to keep them off balance, or have petroleum jelly rubbed into their eyes to impair their vision.’

Just a minute ago I read this story shared on my FB page. I felt so sad about this and I am sharing this with you guys.

It's about a petition started by Denis Bouliane from Canada. He shared a story from the blog about a guy not showing mercy to a bull he raised since the bull was a calf. I think the guy that first blogged about this also seen this being shared on his FB page. It reads…

“This morning a tragic and heartbreaking story appeared on my Facebook page. Perhaps you've seen it reported elsewhere? The picture, dubbed 'The Kiss of Judas' by the Spanish newspapers, almost tells the whole story. It shows the breeder of a bull, who had raised and cared for him. Once grown, the animal was sold for bullfighting. As he was in the ring being hideously tortured for the amusement of the sick and mindless spectators, he spied his beloved and trusted 'friend' in the crowd and hoping for help and relief, ran to him. The kiss was all he got. The perfidy was complete.

The betrayal of this bull is poignant because of what the photograph captures. It is the precise moment when a helpless creature reaches out to the only being that he believes can, or would want to help him.

Reading this, I was disgusted with the man, but even more with a society that condones this. Disgusted, and profoundly disturbed. How are YOU feeling reading this?

We need to get together and stop this nonsensical abuse and torture of innocent animals. I believe it is absolutely intolerable. Join me in sending a clear message to this country's president, Mariano Rajoy, and let's boycott it as a destination for travel. Let's hit them in the only place they have ears: their pocket book. It is more than time that this barbaric treatment of animals ceased.

40000 bulls are tortured every year in this way in Europe alone, and 250000 in the world, in 9 countries. There are 42 bullfighting schools in Spain alone that teach children how to torture and kill Bulls.” bullfightingfreeeurope.org/

If you are against bullfighting and want change you can check it out here on the website below, and please don't forget to sign the petition.
change.org

I would also like to share with you a lucky bull who was bought from an auction in 2012.

Thomas of Rennes, France, bought a bull name Fodgen. If Thomas did not buy the bull, Fodgen could be inside the ring being tortured.

Fodgen is one lucky bull. Thomas and Fodgen develop a close bond together.