It’s almost a month since an Indonesian local singer died from a single snake bite.

It was reported that there are at least 450 species of snakes in Indonesia. Only 5 so far are identified as poisonous. 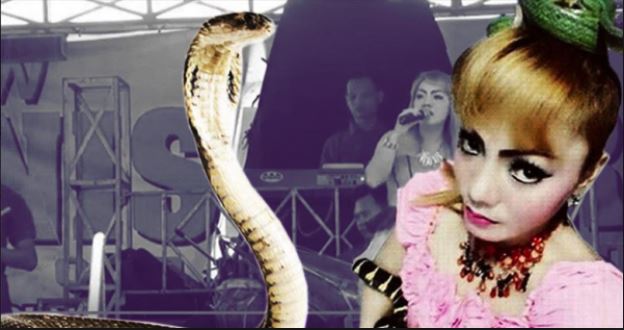 They have 2 species of Cobra that are living in Indonesia. King Cobra and Black Spitting Cobra. Both are said to be aggressive when disturbed. The Spitting Cobra can eject venom for several feet at someones eyeballs. Both bites from these snakes can cause muscle weakness followed by respiratory paralysis or death.

It is also said that the venom of a Cobra in just one bite can kill an elephant or 20 people.

King cobras are the world's longest venomous snake and grow to around 5.5 metres long.

Below is a video of an Indonesian singer Irma Bule (29), who liked to perform with different species of snakes. The singer used boa constrictors and pythons in previous acts. On April 4, she danced with a King Cobra called Rianti.

Irma Bule was bitten mid-performance in the village of Karawang, West Java, by the venomous snake. Usually the handler taped the mouth of the snakes before the performance but for some reason the handler did not do it.

Irma was well-known for using reptiles in her acts and thought the king cobra, called Rianti, had been de-fanged.

The snake bit her thigh, injected venom into her bloodstream until a snake handler pulled it away. The part that we do not understand was when she refused to take the antidote given to her.

The singer continued singing for 45 minutes, until she began vomiting and having seizures. She was brought to the hospital but unfortunately she did not make it.
Ferlando Octavion Auzura, who was in the audience said to the Indonesian press “In the middle of the second song, Irma stepped on the snake’s tail. The snake then bit Irma in her thigh,”

Another report said that the snake came out from the sack and bit her.


You might think that she was crazy for dancing with snakes. But not really, It was said that Irma Bule was not a big time singer. She was only doing small shows and being paid for around $20 to $25 per show.

She started singing when her teacher told her she had a good voice and had future in the singing industry.

Advice from Snake lover in Jakarta.
“If you get bitten by a non-venomous snake, it may hold on for quite a while as it doesn't know what to do. To get the snake off you, either use a metal spoon to pry open its mouth (I don't approve of this as you'll hurt the snake badly by breaking its teeth) or put the part of you that's being bitten into a bucket/bath of water -- the snake won't be able to breath and will let go. Alternatively, just sit down on the ground, relax and wait for it to let go. If you make sudden movements and run around, it will hold on tighter. (As snakes can't hear, it's quite OK to scream a lot as the bite will most likely hurt a lot.)”