The Voice teens Philippines is now in the third week of its blind auditions.

Last week, there were eight teens that auditioned but unfortunately only 6 of them can go to “the battles”, the next round of the competition. 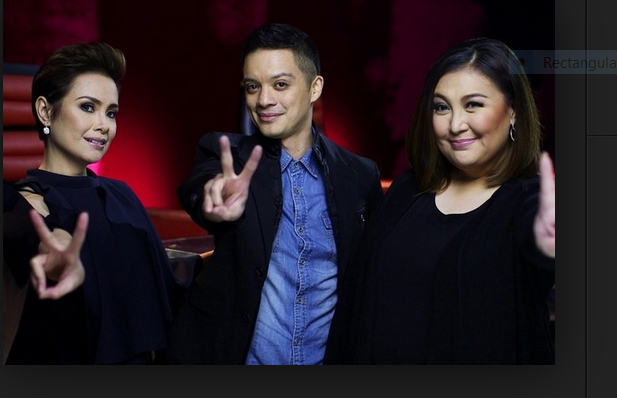 The Blind auditions:
Artists will be given a minimum of 90 seconds to sing their audition piece. The official coaches of the show will be sitting on a chair facing away from the stage and artist. The coaches will only judge by the power, clarity, type and uniqueness of the artists singing capability. If they like what they hear and want to mentor the artist for the next stage, they will push a button on their chair that will turn the chair around to face the artists for the first time.
If a coach turns for an artist, that artist will be included in his/her team. If more than one coach turns around, an artist will pick his coach. If no coach turns, his/her journey ends momentarily ( can still try to audition next time).
Each of the coaches will have a certain number of artists in his or her team who will be advancing to the next round.
There is a new addition in this competition called is the Blind Blinds. The stage is covered with a curtain and will only be dropped after his/her performance.

Live shows
The "Live shows" is where the remaining artists per team perform in front the coaches, audience and Live Broadcast. Each artist will be given a song to sing for a chance to advance to the finals.
During the first two Live shows, each coach will pick three of his/her artists in a head-to-head battle to win the public's vote. The voting results are announced on the same night as the live shows. The coaches have the power to save one artist that had not received the public's vote that week. The artist not chosen by their coach will be eliminated from the competition.
At the end of the first two Live shows, only four artists per team will proceed. From the third and fourth live shows, the public and the coaches will have equal share of power on which artist would advance to the final four, with each team being represented by one remaining artist. During the finals, the winner will only be decided upon by the public through different platforms.
The artist of the competition that will received most votes will be crowned as The Voice teen.


Brandon Ungab; Back At One (Team L)

In the next stage we will be seeing many good singers end their journey. But it’s a competition, someone has to lose and someone has to win. We will just sit back and enjoy the programme eh.

For sure there will be more sappy stories to hear. I hope though that people will be more wiser to pick the champion of “The voice teen” or the competition will become “the votes teen”

Going forward, the coaches such as Lea Salonga, Bamboo Manalac, Sharon Cuneta and Sarah Geronimo will continue their search for talented singers for the next round.
Hosted by Luis Manzano and Toni Gonzaga, The Voice Teens Philippines airs Saturday and Sunday at 7:00pm on ABS-CBN.